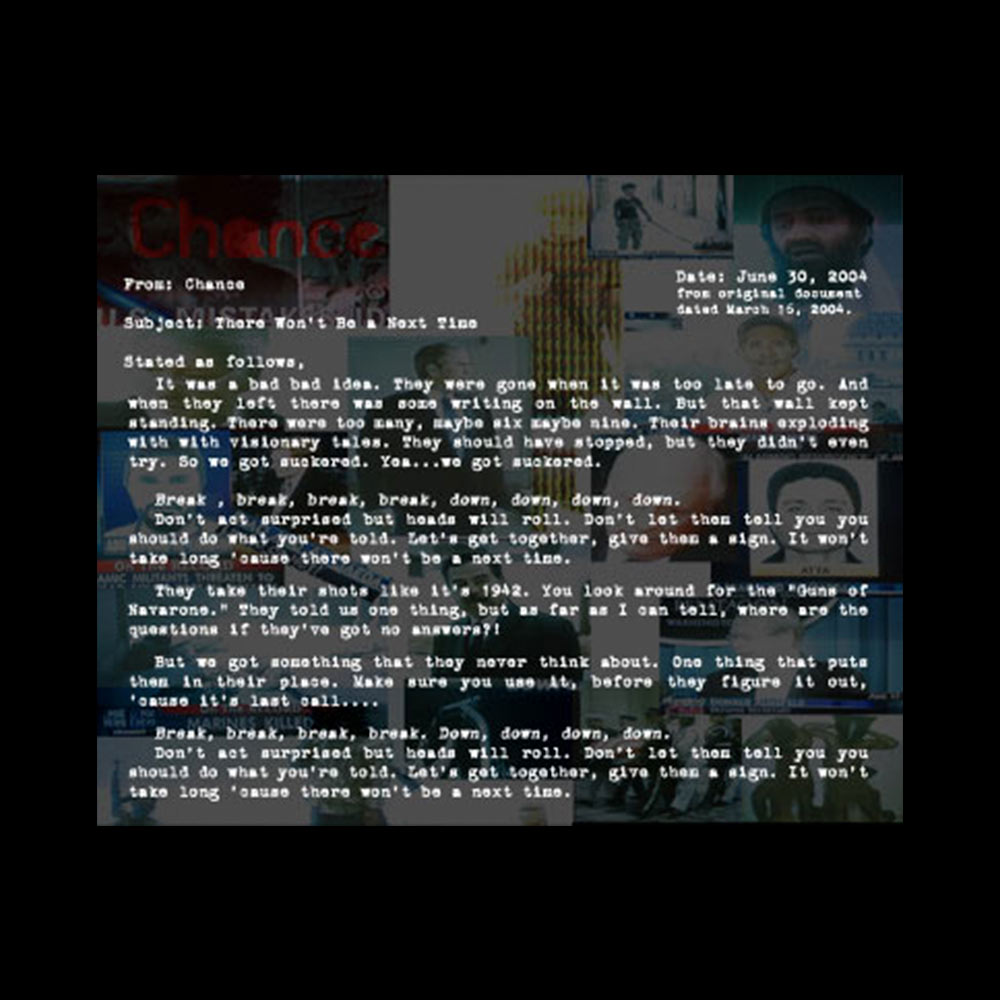 Won’t Be a Next Time

It took one speech to take a centrist democrat like myself to favor the Iraqi war at the onset. The one Colin Powell made at the U.N.
Colin Powell has always impressed me as believable.

But I always had this feeling we were prosecuting the wrong war, barking up the wrong tree. That we hadn’t finished the job in Afghanistan (and surrounding areas). That we were handing Islamic Militants all over the world a reason, proof even, that we were nothing more than crusaders waging a war against Islam as a whole.

I don’t know if it was one thing, like Abu Ghraib (And all those Al Qaida recruitment poster photos we passed out in the media for free), or Richard Clarke’s testimony in front of the 9-11 commission way back in Feb or March. Or perhaps a whole host of things including the arrogant and smug nature of our President who has single handedly destroyed our foreign policy and America’s standing with our allies. But it became apparent that I, along with many other Americans, felt that this war was the wrong one, at the very minimum fought at the wrong time (say nothing as to why we didn’t wait for the inspectors to complete their job). And for all the wrong reasons. Fahrenheit 9-11, for example, taught me nothing I didn’t already know. (Notwithstanding the power of the movie itself.)

The Real Intent of WBANT:
For the moment, though, these are just words. Some will view them as unpatriotic; somehow feeling that dissention is Un-American. Understanding fully that America was founded on the concept of dissent, that sort of talk is marginalized fringe speak, and probably more destructive and un-American than ANYTHING someone who dissents could say because it is dismissive and disengaging. But frankly, I don’t mind that at all (that jibba jabba), because MINDING it would be un-American, now wouldn’t it.

(And to any and all who feel that, in the coming months, Iraq will right itself in due time——which would be wonderful—— the ends does not justify the means.)

No, the real intent behind the song is simply this: Don’t rally and snarl traffic, don’t spit ’til you’re blue in the face, Don’t take it out on anyone who disagrees with you in anything resembling a vindictive manner.

No, just vote. Vote and remove them from office. It doesn’t take much time, hardly any energy, and certainly doesn’t force you to say anything you may later regret. Your neighbors are still just as American as you are (a notion very much lost on the conservative wing of the Republican Party.)

No, vote them out and let’s get back to the complex issues of re-uniting a fractured country (ours) and waging a war on terror together. Because at this point, it’s not about settling old scores (Iraq), it’s about winning hearts and minds, and that won’t be easy. That will take a generation.

Always had the intention of having no live drums, except maybe a pick up beat during the solo. Note that the guitar solo is doubled by the voice. Actually, it’s the other way around: I sang the melody for the guitar solo and then recorded the guitar solo.
Other totally goofy geek note: There is only ONE cymbal hit in the entire song. Find it!