"We found her. She is expecting your call."

The story of how I found my birth mother

W ell, here is the short and sweet of it. Yesterday morning, I got the call:

“We found her. And yes, she wants to speak to you. She has given me permission for you to have her phone number. She is expecting your call.”

And that is is how I first spoke to my Birth Mother.

To say the last 24 hours have been a whirlwind of emotions is not even the half of it.

Here’s how the day went

At 9:48 AM, I got the call from the Adoption agency. My counselor who has been guiding me (for the past 5 months) gave me the info above and said, “she’s waiting for your call.”

But first I called Christina: my wife, my best friend.

(Caveat: Christina cries when she watches Home Improvement television shows. So take that for what it’s worth 😉 )

“Mom…they found her. And she is excited to talk to me.”

“Wow!” My mom said. “I cannot belief it happened so fast!” (misspelled purposely so you can hear my mom’s magical little accent)

See, this all started because I decided to do one of those fricking DNA tests. I knew I was 100% Colombian. But that was it. Nothing more.

So 23 and me confirmed my heritage. At that point, with my father passed, and my stepfather passed…. I thought:

“Why wait any longer? Why not share this with my Mom and my family NOW rather than waiting for something else to pass?”

So on July 19th of this year,  I contacted Catholic Charities in Orlando, the place where my family adopted me. After some struggle to find the right person to speak with, I got placed with an incredibly kind counselor named Leesa who took on my case and had to first “find my file.”

And then the hurricane in Florida happened, further delaying matters.

Then they confirmed the file’s existence. I had to fill out a huge questionnaire to make sure I wasn’t loco. Then the next step was a Private Investigator.

The counselor Leesa opened my file, reviewed it, and called me with her preliminary findings. Inside was correspondence, even a baby photo, from which she developed a working theory as to how it all went down. From my file, I asked for and was given for the first time in my life a “one sheet” of non-identifying information: a summary of my biological parents’ background (made by the adoption agency’s reps at the time).

Then I got a little silly (as I am wont to do), and began doing some personal investigating (google and facebook are your friends). I began by deducing certain things, cross referencing things, doing some math and your general hunching to arrive at some conclusions that I felt were practically indisputable. “Too many coincidences!” I shouted to Christina as we stared at photos and information online, late as Thursday became Friday.

I even emailed a new friend named Felix (a 2nd cousin from Colombia who I befriended on 23 and me over the course of the last 5 months). Even he was amazed at the coincidences, what had transpired, and offered some suggestions and thoughts. Or my friend Dayna who had full membership to Ancestry.com. She found some evidence that made some strong suggestions. Or even just speaking with my dear childhood friend Kim, as I had told her about what I was doing over the weekend when I went to Orlando to visit my Mom for her Birthday. Couple all their thoughts with mine, man this felt convincing.

Thing is, I found her Facebook page.  And I wondered…. Could it be her? How could it not? I stared at her picture for hours.

But I didn’t want to act on it by myself. I wanted to trust the process and only speak to her if  I knew for certain. Besides, what if I was a secret? Or worse, what if I wasn’t thought about or…

**Let me stop right there and explain. I  think you have to understand something about me, and perhaps about all adopted people:

No matter how beautiful our lives are, or how wonderful our parents are…on a cellular level… a part of us feels unwanted. No matter how irrational that appears, feels, sounds: it’s just… true.

So Friday morning, I called told the adoption counselor to tell her what I found. She was out in the field, and was just so diplomatic about it, but revealed nothing. She told me to email it to her, but that she couldn’t comment. At all.

So I composed my email like some sort of CIA Dossier. Details, clues. Hunches. All of it was there. All weekend plus an extra day when she was out of the office I waited for the following reply, which came Tuesday morning:

“I can neither confirm or deny….” “We will continue to proceed with our investigation and keep you posted.”

Damnit. Ok. In the end, I understood.

Equally diplomatically, I wrote back:

“Ok, just let me know if you find anything out and how long I should wait til I pester you again.”

It wouldn’t take long. 20 hours later, my phone rang with the news.

After my Mom wished me luck, I got off the phone and grabbed a glass of water. I quickly texted my boss and told him I would be unavailable for the next who the heck knows. I told him why. “That’s Awesome” “Great Christmas Gift” “Good Luck” he wrote.

I dialed the phone.

She cried. I cried. But honestly, the tears quickly turned into wows and gratitude and just… wow.

We spoke for 15 minutes before she mentioned that she likes to whatsapp with her daughters.

Oh, I didn’t mention that to you yet? I have…. three…. new sisters.😎 And they now have an older brother….that they have known about: since they were in their teens! That’s right: I wasn’t a secret; and I was wanted by them too.

So I said, “Well I would LOVE to skype, or facetime or whatever!” She said absolutely but said she couldn’t right now because… (I’m not kidding):

“Yes! I got so excited I just pulled my car over and have been sitting in the car waiting for your call.”

We both laughed. She said “give me ten minutes.”

In that time, I called Christina. I called my Mom. To both of them I said:

“This couldn’t have gone better. She is so kind and sweet. There is no defense or touchiness… nothing negative. Only love.”

I’m shaking with adrenaline as I spoke to them. I asked my Mom:

My Mom sounded nervous; her words weren’t, but her tone was (and I can understand…. so much to process!).

I told her I would give her the telephone number after we finished Facetiming.

So we facetimed, for maybe an hour and a half.

And there—for only the 2nd time in my life—I looked into someone else’s eyes and at a face that looked like me.

Do you understand what I mean? You see: Henry was my first blood; my first “person who looked like me” experience. That little gift of a child was actually my first opportunity to see something that so much of humanity may just take for granted.

I first noticed the contours, the jaw line, the thick hair, the eyes. The nose. We just kept saying wow. She was so happy. She called it a miracle. She said that Juana (one of my new sisters) had counseled her: “Keep it together, Mom! You don’t want to be crying the whole time you talk to him!” hahahaha 🙂

I called Christina and my Mom yet again, recalling as much as I could. Then, Leesa texted me:

I called Leesa to let her off the hook and we talked for probably 45 minutes.

And then Milla (She goes by Milla —pronounced Mia—which i believe is simply a combination of her first two names : Maria Emilia) …Then Milla sent me 4 telephone numbers via whatsapp:
For the three sisters, as well as one for the woman who will now be my Aunt Claudia. Oh.. and My grandmother is still alive. She’s 95, or 92, or 94 or 96 depend on which of the 4 people I talked to yesterday hahaha. 🙂

I went down the list, and first got a hold of the youngest of the three: Mariantonia.

Holy moly. Lives in Barcelona. She’s just as sweet and as cool as can be.
We spoke for probably 30 minutes. She’s in Colombia right now as the whole family gets together for the holidays.

Then spoke to the oldest, Manuela. Lives in Colombia. And wow she is just so…..
You know what? I started to feel a thread occurring: Kindness, warmth. Openness. generosity.

I went to pick up Henry from school, I explained him all I could. He was blown away.

And then lastly, Juana, the middle sister.
She was worried her English was not that great. It was fantastic. And she confirmed what I felt about the others: they were all so warm and charming. So open and welcoming.

Some of them had been crying throughout the day. My photo had already been bounced around on social media to their friends. If you don’t mind me a moment to brag, I think some of them were even showing me off!

I had so many questions. They answered all they could with big bright smiles on their faces. You could feel it from Los Angeles.

They unequivocally welcomed me and my wife and my son and my mom into their family. That became a theme of the conversations: Welcome.

I am typing this at 1:38 in the morning. I really should be in bed sleeping. I have work tomorrow. But it’s all I can think about and I’m writing it down.

Not that I’ll ever forget this day… ever.

A brand new chapter of my life. And in theirs.

This day has been spellbinding, mesmerizing. I’m completely and totally overwhelmed. 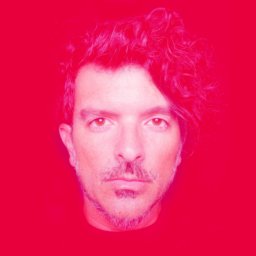