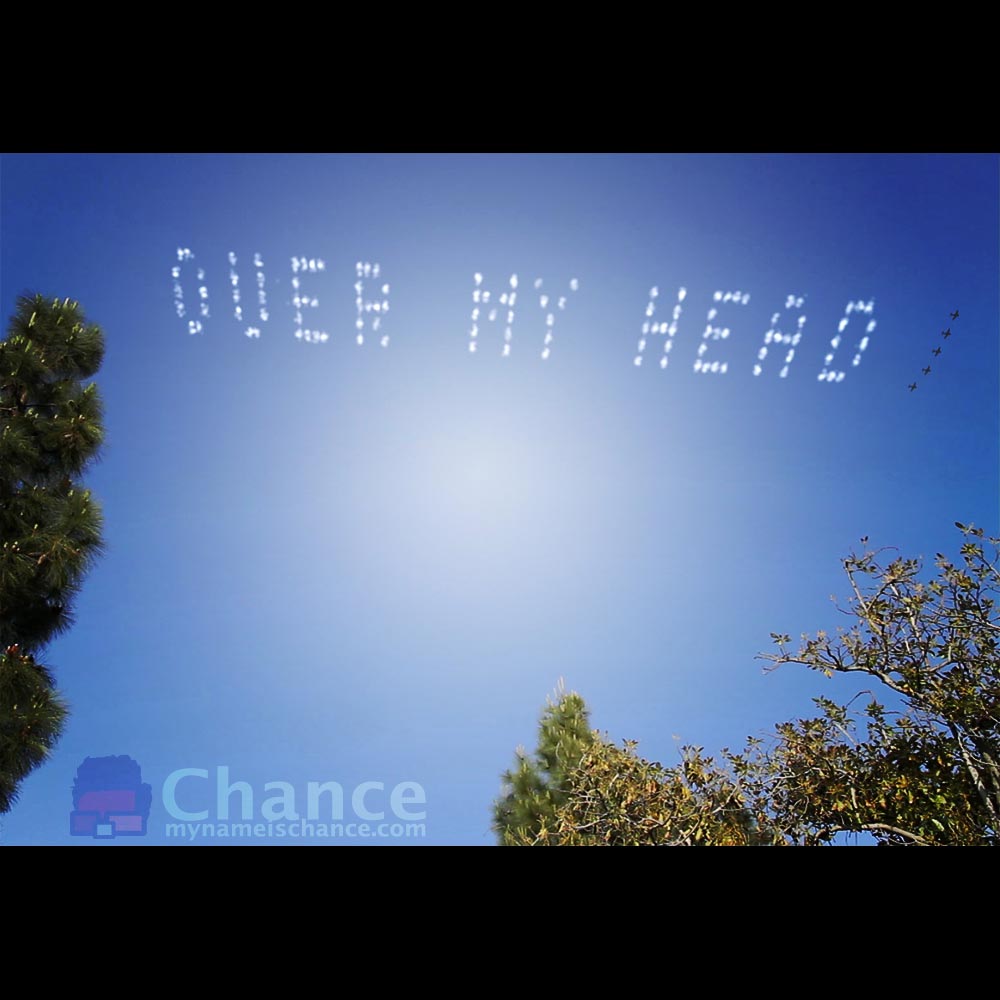 I can see a part of me that wants to be the quiet type
Never mind the bullocks, or the megaphone, or the blatant hype
If you think I pull it off, you should be as happy as me

‘Cause everything that I’ve been told don’t make me feel like makin’ nice
Harder to get rid of; for a common cold, such a heavy price
If you think I pull it off, you should be as happy as me

And so I clock in, toe the line, and wake up at the same old time
Drone the words and follow suit, another day, another crime
If I shut my mouth I find, that everyone’s as happy as me

When in Rome, when in Rome, some kinda cataclysmic moan
Super sweet, but flavorless; like you never knew what you should have known
I think I can pull it off, if only, only, you had told me

To stand in awe or amazement of either a collective effort or an individual performance is one way. Maybe it’s just the way someone lives their life; sometimes it can be difficult to figure out how they do it with such style and grace.

That’s what Over My Head is about.

Starting around 10 AM on a Saturday, I began this song on Piano. First thing I played was the first thing I used: the intro piano part. Nothing about it changed. I was so taken to it that I knew something was about to happen.

Immediately heard the vocal melody, I grabbed my iPhone and sang some gibberish into the recorder app. For an hour and a half, I sat there and sculpted the words.

Wife walks in right around lunch time, maybe a little after. At this point, I had created a loop of the piano part but, at that point, had only added the toy piano thing that you hear on the 2nd verse and the final chorus. But that’s it. I hadn’t recorded any vocals (and no other instruments). But already I felt very confident about the melody and the words I had just written, so I just sang them to her while the loop played and she stood holding Henry.

After I finished, I looked over, and noticed she was well, a little emotional. “It’s just so sad,” she replied, hearing the words for the first time. Looking into her eyes, you could tell she was trying to figure out whom and what the song was about. She had her suspicions that this song was more personal than I normally let on.

Well, I didn’t offer whom the song was about , figuring she’d eventually put it together on her own. But I did tell her that, on the substance of the lyrics, I disagreed.

I mean, I understood why she felt that way from an initial reaction, because the chords had a tearful feeling to them, and especially alone and without the rest of the the music and its parts (not yet written).

But, instead, I felt it to be beautiful and, if anything, the singer’s flaw was that he was blind to his own potential and confidence. Now, he never lets on if it bugged him; ultimately he was just in awe of whom he was singing about. So he wasn’t complaining and he wasn’t begrudging his muse; he was blown away by it/him/her.

Not too much later, I came up with the bass and drums. I liked how restrained and foundational they were.  If you listen to the bass, it’s literally a whole bunch of whole notes. It’s tough for the musician in me to not want to play more. But it’s very easy for the songwriter to see how well it works. And nowadays, the songwriter usually wins.

And, to tell you truth, I liked how they both set up the 6/8 feeling of the piano. It made it feel even more like a lullaby.

Personal Aside: For those of you with kids, or maybe young siblings: one of the most interesting things you find yourself doing is how you rock the baby…back…and forth…back and forth… Sure, it’s sort of obvious how natural it is to do that. But what I find interesting is how you unknowingly do it even when you’re not holding them. It’s this internal rhythm, and it can be very peaceful. For example, I have found myself rocking the grocery cart at the grocery store (just like I do when he’s in the stroller), even though my son is not inside it. I know! Weird!

And then came those guitar parts. I had so much fun writing and recording them. From both a technique perspective, as well as a sound and listening back perspective, I found they fill the song with this soaring sense of both earnestness and enthusiasm.

And then, ultimately, was the decision on the vocals. I wanted the words of the chorus to not only feel universal, but sound that way. So I think I sang the chorus 5 or 6 times to give it a small crowd feel.

Hey, at least that’s my take. What do you think?

My favorite recording technique that I used on this song was how I dealt with the guitars. Almost all of them are single parts (rather than a doubled up performance), with the dry part on one side, and a long reverb on the other.

The clean guitar part (coupled with the reverb) may be the prettiest guitar performance I’ve ever recorded. It continues to surprise me. I just love the sound of it.

It’s the default setting on ProTool’s SansAmp plug-in recorded dry on one track; on the second track is a long reverb of around 4 seconds, from the EMT-250 plug by Universal Audio. I split the sound coming in so I could record the reverb to the second track as I played it.

I’d say that’s it, but it’s not. The key to this tone is my Fender Strat, set on the middle pickup.

I wrote this e-mail to my friend Talmage. Talmage is a digital VFX artist, and we’ve always wanted to work together. In the e-mail, I continued:

“… I have this idea for a video and it involves (explanation unnecessary) ….but the kicker is I want to have some of the song’s words written in the sky. I don’t have a video treatment written; just this germ of an idea. Is it at all doable?”

Talmage wrote back: “Yep. It’s totally doable. Let me know what you’re thinking and what composition you want.”

In a matter of twenty minutes, I went onto my balcony, shot a 13-second video of the sky, panning left to right, then up. I output the video clip and uploaded it to the back-end of my web site.

That was in April.

Here now is a perfect example of how cool ideas germinate from original ideas. You see, truth be told, my original idea was writing the words, “When in Rome…When in Rome…” across the sky. These were lyrics from the song, “Over My Head”, and I thought, presumably, that I was going to write a visual video around this effect and clip. It was the mark of the song I fondly thought would be enhanced by a look up to the sky and seeing those words.

But that idea turned out not to be.

Talmage would occasionally ask if I “had anything yet.” And every time I thought of a treatment for the video, it’d fade soon thereafter. It just wouldn’t stand up. None of these video treatments would; they weren’t working on any level whatsoever. But the skywriting idea just wouldn’t leave my head. Couple this with the fact he had already began work on it!

Not too long after that first exchange, Talmage sent me an e-mail: “Yo mang, we’re in bizness.”

I downloaded his first render test, and it was absolutely perfect to me. It captured the spirit of what I wanted. But Talmage was unfazed. “Nah. I still want to tweak wind, fade, turbulence, smoke life…” That’s when I knew “he was IN.”

We discussed font and composition. Once we narrowed down the font (dot matrix, then a scoreboard font, then back to dot matrix), we discussed point size (5? 7?). He researched which skywriting planes might be used and then created the digital models (T-6 Texan WWII Trainers). Then we discussed how many. We talked about the sun’s bounced light from the ground illuminating the bottom of the planes, as well as myriads of other details, such as: particle emission; scale; distance; how the planes give the words scale….

Mind you, this is for only a PORTION of a 13-second video. His part was, what, a few seconds? That to me is the siren song of VFX. So much profound artistry—as well as blood, sweat in tears—in just a few seconds of time for this one simple idea. It’s mind boggling when you consider the work force of an entire movie.

All this was right around the time Talmage’s first child was to be born. As it turned out, this was serendipity; his paternity leave left him with nervous time on his hands. (his words, not mine hahaha)

At one point, I came to the conclusion that none of video treatments for Over My Head was working, so I asked him if he’d wouldn’t mind re-doing the render with the words “Over My Head” in the sky. I figured I could use it to announce the song, and maybe–if lucky–I could later incorporate it into the video.

And that’s just what I did.
This is only the 2nd time I’ve used someone else’s artistry for one of my songs. And I’m very grateful I did. It literally couldn’t have come out better.